The Renault Alpine 108 was produced in Brazil from 1962 to 1966, under license by , branded «Willys Interlagos». It was the first Brazilian sports car.

Bulgaria produced its own version of the Renault Alpine, known as Bulgaralpine from 1967 to 1969. About 150 vehicles were produced.

A few examples of the Alpine GTA were imported into the Canadian province of Quebec, with the expectation that AMC/Renault would be adding the model to their Canadian lineup. The GTA was designed by Renault to meet North American standards, however plans to import the GTA to North America were cancelled by Chrysler shortly after their takeover of AMC.

Mexico produced its own version of the Renault Alpine, known as Dinalpin, from 1965 to 1974, assembled by DINA S.A., which also manufactured other Renault models under license. About 600 vehicles were produced.[]

The Renault Alpine is set to become a sports car brand within the Renault brand and as a 60th celebration to Alpine it has released a sports car concept called the Celebration. The Celebration concept looks a lot more believable and possible than the A110-50 concept revealed back in 2012.

Renault has been threatening to debut the return of the Alpine for a few years now and maintains that it’s on track for 2016. This sports car concept forms the base of a two-seater coupe sports car with that harks back to the Alpine rally cars with its spotlights in the centre of the front bumper. Carbon detailing is used to highlight the high-tech features of the car’s body, from its spoiler to the side sills, diffuser, rear air intakes and mirrors.

The rear integrates air intakes built into the rear quarter panels to contribute to engine cooling. The engine cover – which can be spied through the louvered motifs of the rear window – reveals the mid-rear positioning of the power plant.

No details are available on the powerplant, but it is expected the Renault Alpine Celebration will dig into the Renault parts box for either the Clio 1.6 turbo or the Megane 2.0 turbo. With efficiency being so much of a factor these days it’s likely the Clio engine will be favoured. That’s not a bad thing though as the Alpine Celebration is said to weigh just over 1 000kg. Hopefully Alpine does away with the dual-clutch ‘box and goes for a straight six-speed manual which will keep the enthusiasts happy.

No release or debut date has been set but most pundits expected a real car to hit the show stands at Geneva Auto Show in 2016.

The Renault Alpine Celebration was added in the the Lunar New Year 2017 Update as a high-end Class C car.

The Alpine Celebration has performance based on the Lotus Exige S Coupe, an original Class C car.

Though not the best car for Multiplayer, the Alpine Celebration performs somewhat similarly to cars like the ONUK Sazan LM, Rinspeed zaZen, and Mercedes-Benz Biome.

Here are some multiplayer tunes:

With the revamped matchmaking system as of the Fifth Anniversary Update, the Alpine’s fast acceleration and drifting allow the Alpine to defeat certain cars with similar speeds to it in technical tracks like Sector 8.

As of the Sixth Anniversary Update, the car no longer requires Blueprints to be assembled and has a full purchase price of  4,500, same as the hidden purchase price.

The Alpine Celebration was initially available with its R&D debut and was made attainable again starting with the Car Blueprints Update. 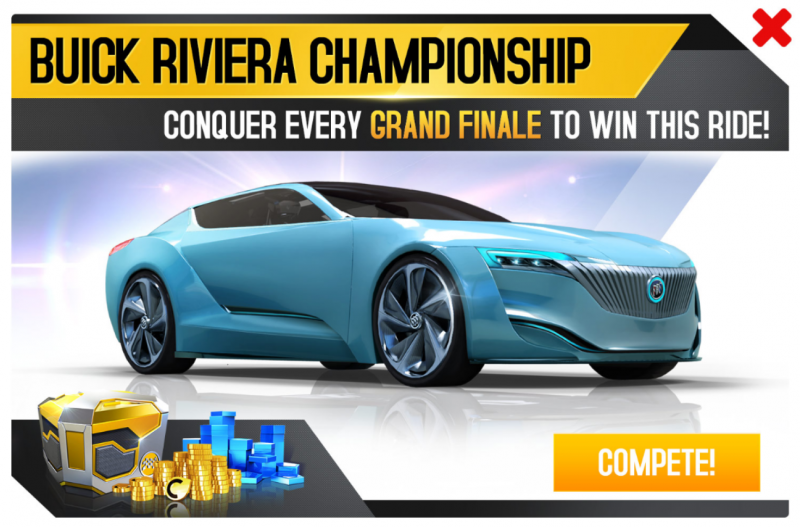 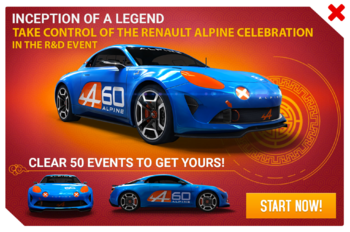 The Renault Alpine Celebration’s Research & Development event was held on January 25, 2017, as the 18th R&D event in the game, after the McLaren Mercedes MP4-25’s Championship event. It was revived as the 58th R&D event on February 22, 2019, as part of the Fast Lane Update’s Asphalt Moments Series, with a prerequisite of VIP Level 2. It has a total of 50 Tests spanning 4 Labs that must be cleared in 10 days once the event is started.