All 2018 Charger models have rearview cameras and rear parking assistance. The base-level infotainment system starting with the Charger SXT has a 7-inch touchscreen display for the Uconnect 4 system and supports both Apple CarPlay and Android Auto.

In 2003, Cory O’Brien and Erich Heuschele drove an SRT-4 to a 1st in class and 8th overall finish in the Tire Rack Cannonball One Lap of America.

In SCCA ProRally racing, the SRT-4 (and more recently the ACR version) has dominated the Group 5 (2WD) class since 2003. In just its first year competing, the Dodge ended the stranglehold that the FWD DSMs and Volkswagens had on the class. With three competing the following year, the SRT-4 won every 2004 series race and end-of-season award. The SRT-4 has won every Group 5 and 2-Wheel-Drive class championship in US ProRally and Sno Drift since 2003, and its unprecedented dominance in 2004 helped Dodge earn its first US ProRally Manufacturers Championship in 28 years.

In 2005, Jeff Lepper drove the SRT-4 to its first ever national road racing win in the NASA US Touring Car Championship at California Speedway in Fontana.

In 2005, Dale Seeley, Kolin Aspergren, and Jamin Cummings drove an SRT-4 to a 1st in class and 8th overall finish in the Tire Rack Cannonball One Lap of America.

In 2006, the Dodge SRT-4 officially became the world’s fastest production 4-cylinder car, averaging 221 mph (356 km/h) at the Bonneville Salt Flats in Utah in a car driven by Jorgen Moller. The vehicle was vehicle was tuned by Dave Harris and Phil Hurst for Racedeck Racing.

Multiple SRT-4s were raced in the SCCA SPEED World Challenge – Touring Car Series, and in 2006 – their second year of competition – had become one of the more successful platforms in the series. Robb Holland, of 3R Racing, became the first Pro driver to put the SRT-4 on the podium with his 3rd-place finish at Road America in August 2006. This was Dodge’s first podium and first manufacturer’s points in World Challenge Touring Car competition. Holland would finish the season with 3 top 10 finishes and two top 5 qualifying efforts in the SRT-4.

In 2007, Doug Wind, Devin Clancy, and Ken Brewer drove an SRT-4 to a 1st in class and 5th overall finish in the Tire Rack Cannonball One Lap of America.

In 2007, George Biskup drove SRT-4 (02) Factory Blue/White/Black to many SCCA T-2 National wins as well as set Track Qualifying Record at Road America (2:33.922 beating John Buttermore’s CTSV by .031 sec, that record held for a few years). Back in April 2005, Biskup won the first SCCA National race entered with the (02) SRT-4 at Gingerman Raceway in the snow, as the race was run under yellow and finishing positions were as qualified, SRT-4 was on the pole.

In 2007, Curt Simmons won the U.S. Touring Car Championship in an SRT-4 and Dodge won the season manufacturers points championship by 29 points over Honda behind the strength of several SRT-4’s.

In 2008, Curt Simmons attempts to defend his USTCC series championship, winning in June 29, 2008 at Infineon Raceway in Sonoma, CA. 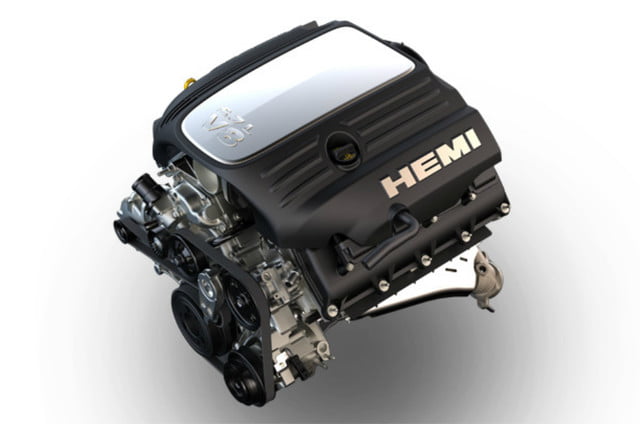 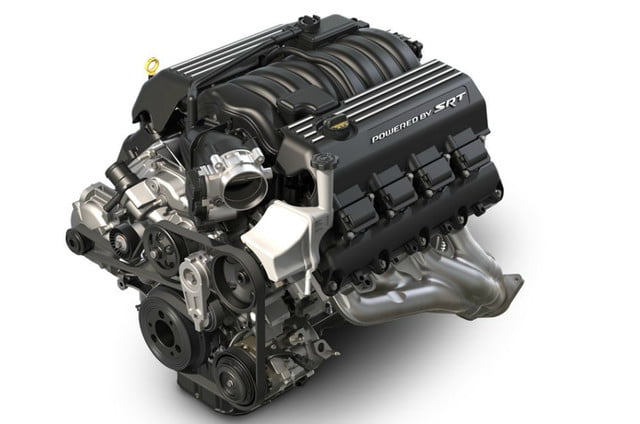 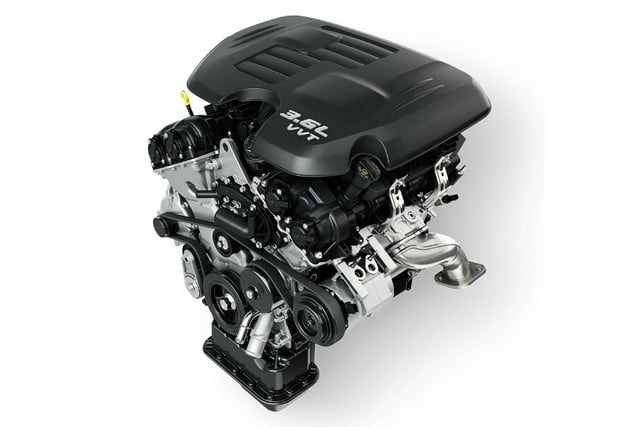 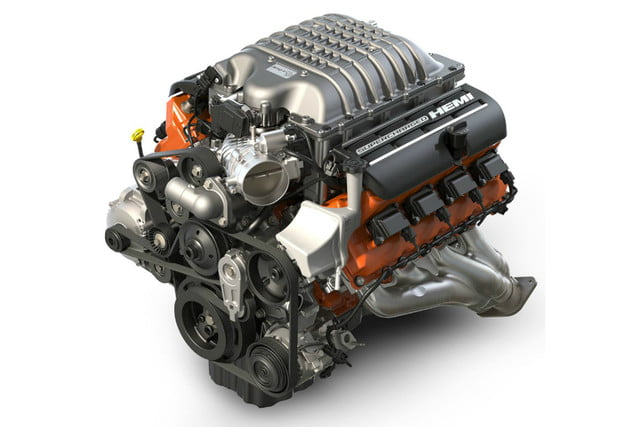 Dodge uses four engines in five different states of tuning for the 10 newest Chargers. All are paired with a TorqueFlight 8-speed automatic transmission.

The Charger SRT Hellcat’s  6.2-liter supercharged V8 delivers 707 hp at 6,000 rpm and 650 lb-ft of torque at 4,800 rpm. The Charger SRT Hellcat’s EPA mileage ratings — 13 mpg in the city, 22 mpg for highway driving, and 16 mpg combined — surprised many people. The concept of a production sedan that turns in 11-second quarter miles and hits 22 mpg on the highway remains a head-scratcher.

Here’s a quick table of the model and engine matchups:

The SRT-4 used the same basic engine block as the naturally aspirated 2003+ 2.4L, and was different from the years previous used in the naturally aspirated Chrysler 2.4L mid-size cars such as the PT Cruiser and four-door Stratus. The SRT4 engine had many improvements, including: stronger crank case webbing, a thicker deck with 11 mm head bolts (vs 10 mm), an oil drain back for the turbo, a cast aluminum structural oil pan, a higher capacity oil pump, a crankshaft of higher hardness steel, improved machining of bearing journals, oil squirters (to cool underside of pistons), eutectic aluminum alloy pistons made specially by Mahle, and forged connecting rods with cracked caps and 9 mm bolts. The cylinder head was also different for turbo engines, from naturally aspirated. The turbo version (PT Cruiser GT Turbo and SRT-4) included: larger diameter valves and seats, exhaust valves made of Inconel, improved cooling and larger oil drain back passages, different camshafts. The PT Cruiser Turbo engine package differs from the SRT-4 because the intake manifold, turbocharger plumbing and intercooler are different. The SRT-4 intercooler was a front-mounted cast aluminum 8-row unit produced by Valeo, unique in its efficiency and computer designed end tanks for air flow.

The turbocharger was a reverse rotation Mitsubishi TD04LR-15Gk with a 6 cm2 (0.93 sq in) turbine inlet. Tight packaging forced some creative thinking on the turbocharger. The TD04 compressor has a compressor bypass valve built right into the compressor housing. The exhaust manifold and turbine housing were cast in one piece by Mitsubishi from high-nickel Ni-Resist steel. The one-piece design improved flow, reduced size and reduced thermal mass for quicker cat light-off. The turbine discharge was also part of the manifold/turbine housing casting, and it looped back around and hit the manifold again on its way to the catalytic converter. Where they met, there was a wastegate valve; keeping the wastegate valve away from the turbine housing improved flow where it mattered most. Maximum boost in stock form was around 14 psi (97 kPa). Piston velocities and valve-train components force a rev limit of 6240 rpm although MOPAR upped the ante with their Stage 2 and 3 kits which have a rev limit of 6500 rpm.

The exhaust system for the vehicle consists of 2.25-inch (57.15 mm) steel tubing, which is run first through the catalytic converter, then through two resonators. The exhaust then splits into two separate sections of piping, exiting through two 3.75 in (95 mm) stainless steel tips at the rear of the vehicle. The exhaust system is unique in that there is no muffler, instead relying on the turbocharger and resonators to reduce the exhaust volume. The end result is a very distinctive and audible exhaust note, specific only to the SRT-4.

In 2003, Dodge engineers built a special SRT-4 Extreme LightWeight for the 2003 SEMA show. It was designed to showcase the factory upgrade parts available for the SRT-4 from Mopar. The vehicle featured lightweight, carbon fiber body pieces (produced in-house), a polycarbonate rear window, and the front window glass removed for weight reduction. The interior was stripped completely, with only the stock dash remaining. A single Recaro racing seat, a harness, and a roll cage were installed for safety. The car featured the first stage 3R Mopar engine performance kit and stage 3R coilovers. Overall, the weight of the vehicle was reduced by 405 lb (184 kg) to 2,500 lb (1,134 kg) wet, and was dyno’d at 360 hp (270 kW) and 383 lb•ft (519 N•m) (at the wheels) by Sport Compact Car magazine. On drag slicks, it ran an 11.83-second pass at 123 mph (198 km/h) in 70 °F (21 °C) weather. This one-off SRT-4 was used for media events and testing of the Mopar development parts, and was destroyed as an asset reduction move in 2009.

Chargers, like all muscle cars, are designed for speed, but the handling matters, too. This year’s Chargers have electronic stability control, antilock brakes, brake assist, and hill start assist as standard equipment.

All Chargers have rearview cameras with backup assist gridlines shown on the infotainment system display. Rear parking assistance is also included with every trim. Blindspot monitoring with rear cross-traffic alert is standard on the Charger SRT 392 and SRT Hellcat but optional on all other trims.

Other passive safety and driver assist features are available either as a package or individually for all but the bottom (SXT) and top (Hellcat) trims. Dodge’s decision to exclude two models may have been made based on very different factors. The plan could be to give potential SXT buyers incentive to step up at least one trim level. The Dodge speed mavens possibly also figure that Hellcat owners prefer to be in total control of acceleration, braking, and steering — even when they’re not on the track.

The three tables below list which safety and assist tech features are standard, optional, or not available for each trim. The standard features are in bold for clarity.